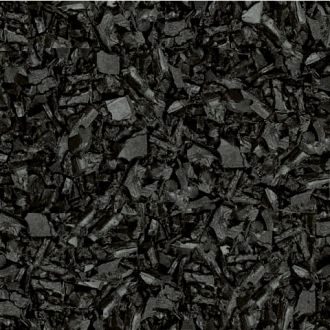 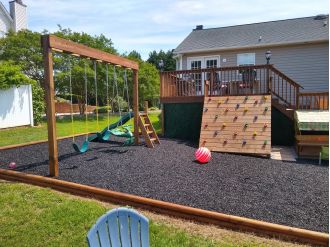 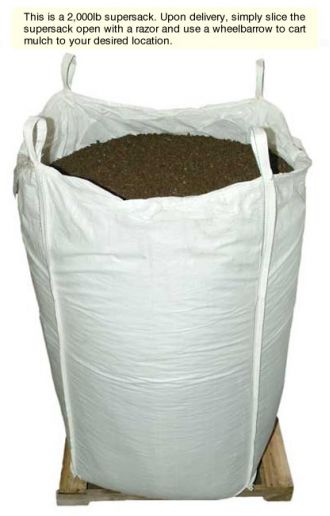 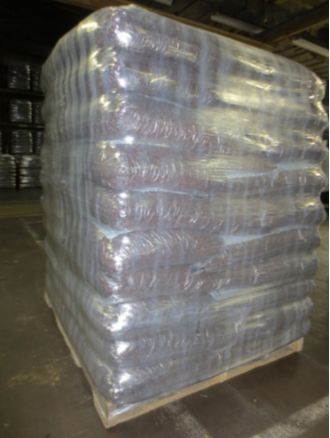 Make your playground as safe as possible while saving money with rubber mulch. Due to its soft and elastic nature, recycled rubber is the safest playground surface for preventing serious fall injuries. When compared with other playground safety surfaces, rubber mulch will cushion a child’s fall better than most other surfaces (please note that grass or dirt are not considered safety surfaces and many children are severely injured after falling on a playground with grass or dirt as a safety surface). Rubber mulch also maintains its beauty even after years of exposure to the elements. Our 12 year color guarantee ensures that your mulch will look fresh year after year.

Our products are made from 100% recycled tire rubber and are IPEMA certified to ASTM standards.

Absolutely! Rubber mulch is 100% non-toxic and eco-friendly. "Playground surfaces can contain recovered rubber and PVC materials that are often more desirable than wood chips, sand, or asphalt, because they can provide more cushioning and thereby may be safer for children. You can find playground surfaces made with recovered materials at schools, military bases, and housing developments." -- Source EPA.gov


What are the benefits of rubber mulch in playgrounds?


Where does the rubber come from?

Rubber Mulch is made of 100% recycled tires.


How long will Rubber Mulch hold its color?

Rubber Mulch from Mulch Direct will not fade in most environments for up to 12 years or more. We guarantee it.

Once opened, Mulch Direct Rubber Mulch has an odor initially. However, within 48 hours, the smell will dissipate.

Mulch Direct Rubber Mulch is colored using a licensed process and seals the rubber after the desired color is applied.

Unlike organic materials, Rubber Mulch will not stain clothes.

A Supersack is a container-big bag, also known as bulk bag that contains approximately 2,000 lbs.


How much rubber mulch will I need?

Rubber Mulch can be used for many applications, please refer to our Rubber Mulch Calculator to give you an accurate estimate on how much you will need or call us at 800-778-6852 and we can assist you in calculating how much you need.


How do I install Rubber Mulch?

The most ideal way to install rubber mulch is over a weed fabric. We recommend using a weed fabric and not a plastic material because plastic is not permeable. When installing rubber mulch over a weed fabric, you will never have any weed problems, and you won’t have to worry about previous mulch debris mixing with it. Rubber Mulch can be installed over your previous wood mulch, but make sure the wood mulch has had time to decay and become compacted.


How do I maintain Rubber Mulch?

Simply use a leaf blower or a rake to remove yard debris.

Rubber Mulch will not decompose. If fading begins after at least 12 years, you can either top-dress it with fresh Rubber Mulch or till it into the soil. Rubber Mulch is safe to till into the soil because it is nontoxic and acts as an aerator to help keep the soil from compacting. Similar rubber products such as crumb rubber are being used for the same purpose in athletic fields all across the country. You can also rake up your faded mulch to use as landfill.


What kind of insulation does it provide?

Rubber Mulch does not absorb water, it will not freeze.

Rubber Mulch is not flammable. Tire chips were tested in 1995 in accordance with the Federal Hazardous Substance Act (16 CFR 1500.44) to determine whether this material would be considered "flammable." (A material is considered flammable if it ignites and burns with a self-sustained flame at a rate greater than 0.1 inches per second along its major axis.) Per these test results, scrap tire material is considered nonflammable.


What if a child swallows a rubber nugget?

In 1994 the Maryland Environmental Services (MES) put this question to a series of tests. At the MES request, a testing laboratory subjected ¾-inch pieces of tire chips to hydrochloric acid (stomach acid). "Visual examination of insoluble residue appeared to indicate only fibrous reinforcing strands were dissolved by the hydrochloric acid. The tire rubber did not appear to be affected in any way; i.e., chalking, cracking, fracturing, etc." (PSI Report No. 486-40013-001)

*If a piece of rubber is swallowed, it should not cause any acute or chronic problems. Short-term issues, such as an upset stomach, will be a function of the amount of rubber swallowed. As to the fate of the rubber chips swallowed, they are eventually evacuated from the body, just like any other indigestible material.


How can I use Rubber Mulch with horses?

Rubber Mulch is great for horse arenas and stalls. It is easy on horses’ joints when they step on it, and it is dust free. Many of our customers mix in the rubber mulch with sand and dirt.


Has Mulch Direct Rubber Mulch been certified by outside agencies?

Mulch Direct Rubber Mulch meets all of the criteria established by the International Playground Equipment Manufacturers Association (IPEMA) and complies with ASTM F1292-04, Standard Specification for Impact Attenuation Under and Around Playground Equipment.

As part of our goal of offering high quality at an affordable price, we also offer a delivery system which is convenient and economical.

Return of unopened packages are accepted within 30 days of receipt of product if accompanied with a valid RMA # supplied by contacting MulchDirect.com. Customer is responsible for the initial freight cost incurred by MulchDirect as well as the cost of return freight. Additionally, there is a 15% restocking fee. Refund will be issued upon receipt of returned merchandise at our facility. Please note: Freight shipping can be costly.

Enter the dimensions for your playground or landscape and click the "Calculate" button.